What is Visec?
Simply put, Visec is video surveillance software that allows you to see video from surveillance cameras, record this video, play it back locally or remotely. Visec also has other modules like License Plate Technology which can read a license plate from a camera, store this plate in a database and trigger alerts. (e.g. like a stolen car has just passed)

Visec is very easy to use and supports popular IP cameras such as AXIS, Vivotek, and thousands of  generic cameras running ONVIF standards.. Visec supports H.264, the latest technology in video compression. Visec also has Hybrid support for older capture cards, fire wire, and USB cameras (which are almost phased out of the marketplace).

How does Visec work?
Visec works by analyzing the video images that it receives from the camera and then processes this video through a series of intelligent algorithms. Based on the user's settings, this video is subsequently stored digitally on the user's storage medium (hard drive or camera's internal flash memory) so that it can be played back either live on the user's computer or remotely over the Internet. Surveillance Cameras are only a small component of a security system. The Visec software creates a synergy with this hardware, allowing users to have a surveillance system comparable to a military grade system used to secure critical infrastructure. While Visec incorporates sophisticated technology, it has been designed for ease of use. In fact, the Visec interface is quite simple to use and is similar to a smart phone.

Does Visec Support License plate recognition (LPR)?
Yes, Visec has one of the fastest engines in the word and currently runs most of Africa's LPR as well as installations in the America, Europe, and Asia.

How do I see video?
Simply press one button to scan your network for cameras. Then select the camera to see live video. The software is like using a smart phone. We kept the interface as easy a possible.

What is motion detection and how does it work?
Visec® Proprietary Motion Detection Technology (VPMD), is a powerful feature of Visec that can be set to record when there is motion. A sophisticated series of algorithms process video and can determine if motion was detected like from someone walking in a room. This feature is helpful because it only begins storing video when it detects movement, and you can control the sensitivity. This also makes it easier for you to playback video because you can just watch video when there is activity. Visec gives you full control to select specific regions in the camera's field of view and exclude others. You set the sensitivity of the motion, from small to very precise levels. VPMD's precision technology eliminates the need to buy any external hardware sensors. Any camera will work with this, since the motion detection is based on software based algorithms.

What kind of Alert features does this have?
Visec can email you a warning every time it detects motion. As soon as motion is detected, you can have Visec send you a picture of what transpired. You can also custom program an http post to create a custom alert to your own 3rd party software.

What are the technical requirements.
The software is recommended to be used on Windows 7, 8 or 10. Visec is multi-threaded and works on both 32 bit and 64 bit installations of Windows. Visec will also run on parallels software for the MAC and its equivalent. For optimal performance we recommend 8+GB ram, and a quad-core chip.

Can I use multiple Cameras?
Visec can support as many cameras as a computer can handle. Usually this equates from 16 - 100+ cameras per server. This depends on the resolution, frame rate, bandwidth, ram etc.

Is there a free trial version?
Visec comes with a 20 day full trial version that allows you to test any and all features without interruption (even LPR). After 20 days, the software reverts to a basic version of features that is free for life with 1 camera. (Note: LPR will not work after expiration)

What IP cameras does VISEC Support?

Visec is 100% ONVIF Compliant.
Onvif is a camera standard that when supported, all cameras working under ONVIF  with work with Visec.

Can I use wireless camera?

Yes, all supported IP cameras work whether wired or wireless.

Can I see Screen samples of the program? 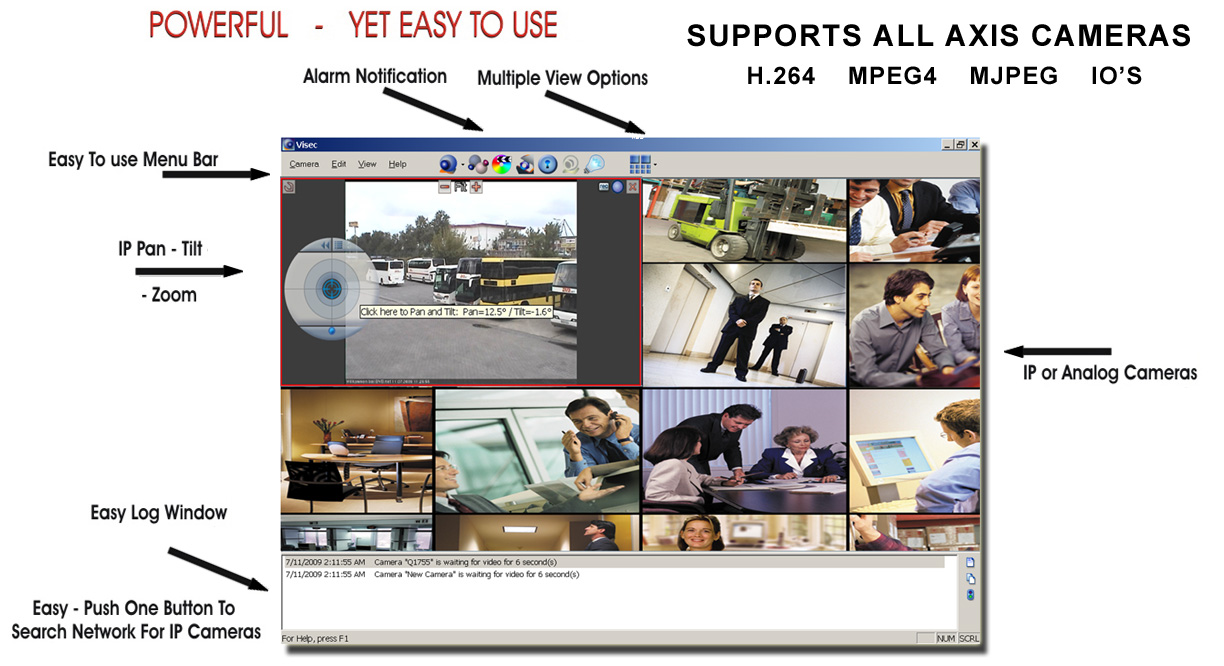 Can I run the program in a secret or stealth mode?

Yes, the program can run secretly on your computer. This is done very easily by pressing the "Switch To Secret Mode" button. Once in secret mode, no one will be able to see the system.

Does Visec have the ability to login remotely?
Yes, Visec has an intelligent web based solution to allow you to login remotely and see live or past video. Visec also has an .exe application for client server control.

What is the Visec Cloud?
This is our cloud server technology mainly used for law enforcement. The technology stores in real time a heavy quantity of license plates of cars, from both wanted and unwanted vehicles. The cloud allows for rapid upload of data, and synchronicity across countries in seconds. Bottom line is it saves lives by allowing Police to rapidly catch bad guys!